What would you do if your deepest obsession comes with a sting? 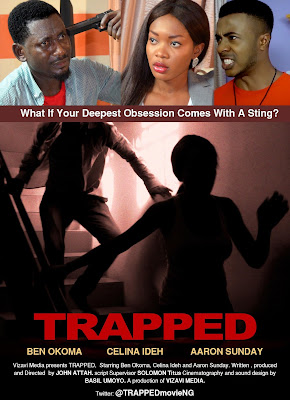 Substance abuse is a time bomb waiting to explode. It has become a global phenomenon affecting almost every country. The most commonly abused substances are cigarettes, alcohol, marijuana, codeine, cocaine and local gin(paraga, monkey tail etc).
Many youths are falling into the trap of substance abuse for different reasons and the related problem are becoming more and more a public health concern and they represent one of the leading causes of illness, injury, cultism, sexual indiscretion, accidents, crime and death. Unfortunately, substance abuse affects not just the individual alone but those around them and the society at large.

John Attah has released the trailer to his highly anticipated short movie, TRAPPED.

SYNOPSIS
Hector, caged in substance abuse, races to abandon the lifestyle that is set to sink everything that matters to him,including his abused detective lover, Ene. Her attempt to upturn the status-duo leads to a major stand-off and series of events that would define the lives of everybody around them.
Starring: Ben Okoma, Celina Ideh and Aaron sunday. Written and directed by John Attah, Cinematography by Basil Umoyo. Produced by VIZAVI MEDIA. Excutive producer, John Attah.
FOLLOW ON TWITTER: @TRAPPEDmovieNG | @JohniBlaze

See the trailer below.

Or watch the TRAILER HERE