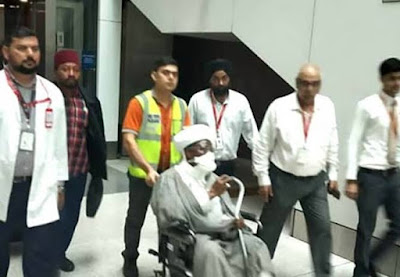 Ibrahim El-Zakzaky has lamented about the situation at the Indian hospital where he is currently receiving treatment, describing it as pathetic and worrisome.

Premium Times reports that the Shiite leader said the conditions at the hospital is worse than that of Nigeria.

He also alleged that the management of Medanta Hospital, New Delhi, had been threatened not to admit him for treatment.

“On getting to the hospital, we are placed under a tighter security situation worse than what we have been witnessed in Nigeria. We are currently more confined than when we were in Nigeria, worse than prison setting," he said.

He said he plans to return to Nigeria to assess the situation. El-Zakzaky was flown to India on Monday, following a Kaduna court order last week.

He had requested to be allowed to travel to India for advanced medical treatment following the deterioration of his health and that of his wife, Zeenah, in detention.

The IMN leader said he wants to return to Nigeria to source for a reliable and trusted hospital among those countries that offered help. “There are some other countries that volunteered to help which include Malaysia, Turkey,’’ Mr El-Zakzaky said.
Posted By VIZAVI MEDIA @ 1:01 pm